I've been busy! Highlights include a virus or two, damage to my computer's mainboard, and accidentally deleting my movies collection. All in the one week. But on the upside, I have finally released a shiny new book: Guidance Fault. All the gory details are on this link.

The novel is utterly awesome and you should buy one immediantly! It's available in US Trade Paperback, EPUB, Kindle, and PDF formats. Heck, the PDF one is even downloadable for free!

It's another story set in the same universe as The Ranboen Contract, but with all-new characters including a female lead. It's action/adventure, with espionage, cyberpunk, and a few military touches.

If there was a successful game released in the last century, it's worth releasing an updated version of it and sell it all over again. The game industry knows this. Unfortunately, they also have some really stupid ideas about how to do it.

This is exemplified in the new Thief reboot. The problems with the game are details quite well by Ben Croshaw's review, but I'll give my own summary here.

In short, I tried to like Thief. I really did. To be fair it is a reasonable game and I have had fun with it, but it's not Thief. It's simply too bland. Given the bigger budgets these days and the years of experience the industry has racked up, why does it fall short of the original? I think it's because the game industry values short term money over product quality and customer satisfaction. They want your money, now, via pre-order. They accomplish that with marketing, pretty screenshots, and holding content to ransom. If the product dissapoints the customers, it doesn't matter. The CEO has already collected his quarterly bonus and will leave the mess for the ext executive to deal with. The next executive just does the same thing of course.

This suicial behavior is harming the industry. In the case of Thief, everything unique about the game was removed in order to jam the game into every possible market category at once. This is like removing all the spice and flavor from a dish to avoid scaring away potential diners, resulting in bland gruel. Thief's setting, characters and plot have been crushed so thin it's no longer possible to care if garrett succeeds or not, or if his city lives or dies. Garrett lacks motivation, so the player does too.

Seriously, I even haven't completed the game yet and I wonder why I should. I certainly can't remember why Garrett should care. I can't even remember what the purpose of the current objective is, though I do remember that it's tenuous at best. I might as well fire up a game of Chess, at least that has survival and a clear antagonist as movivational drivers.

Did they not even bother to hire a writer? Maybe they did and ignored the advice as much as they ignored the test results. Honestly, guards repeating the same phrases over and over, often doubling up and each saying the same thing to the other is just stupid. So the Thief franchise is dead, crushed by the greed of the industry. Long live Dishonored, that seems to be where the spirit of Thief truly survives.

The conservative Australian prime Minister, Tony Abbott, posted a video on his YouTube account. The video is typical mind-control spin, including repeatedly calling asylum seekers "illegals" when they have broken no laws.

The video was (understandably, I think) reported as spam, and YouTube automatically blocked it and suspended his account. That didn't last long, but given how enthusiastically the government has embraced copyrisght and censorship takedowns, it's pleasing to see them suffering from the laws they support even in a small way.

Will Abbott learn it has become too easy to block content? Will he stop using inflamatory and false language? Unlikely. But It's good to see the image below calling his rant deceptive. 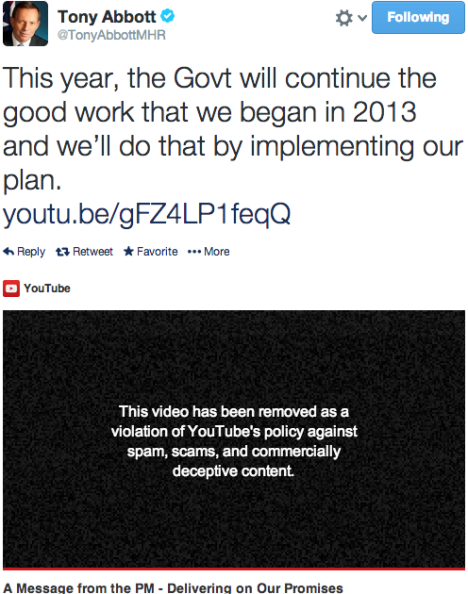